Systematics, Evolution and Ecology of Melastomataceae 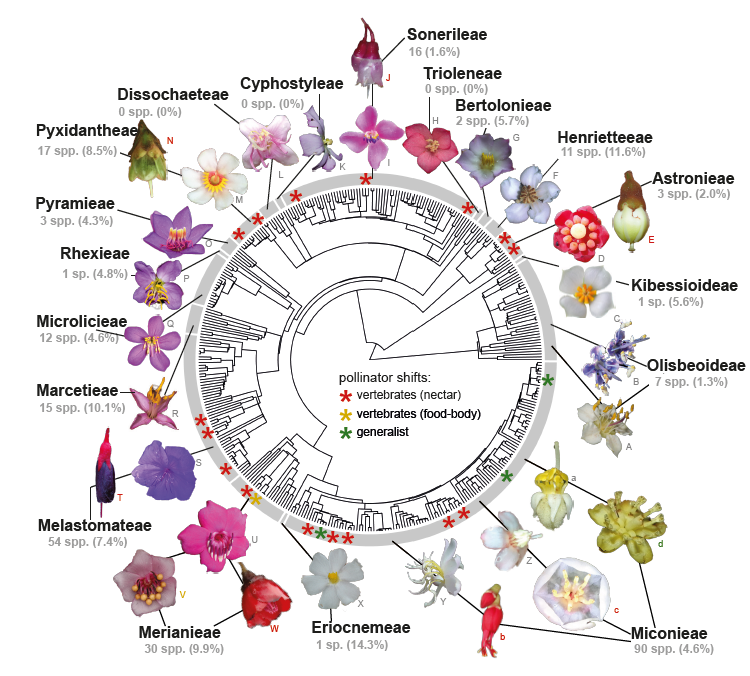 Today is a big day in the world of Melastomataceae! 😀 Finally, after about two years of work, Melastomatologists across the world have put together 34 chapters in a book soon to be published by Springer! Special thanks to the main editors Frank Almeda, Renato Goldenberg and Fabián Michelangeli for their continued effort!

My students and I contribute to the book by a new update and literature survey on the pollination biology of Melastomataceae. This is the first systematic, family wide review since the extensive review on reproductive strategies of Melastomataceae published by Susanne Renner in 1989! Most important findings: The number of species with observed pollinators has more than doubled since 1989 to 272 across 14 of the 19 major tribes! And more importantly: pollinator shifts are not restricted to the New World tropics as long assumed, but have indeed occurred in at least two of the Old World tribes! We distinguish four broadly delineated pollination syndromes, with the majority of species (ca 95.5%) pollinated by buzzing bees, 2.5% by nectar-foraging vertebrates (i.e. hummingbirds, sunbirds, bats, rodents, lizards…), 0.9% by food-body-foraging vertebrates (i.e. tanagers, parrots) and ca. 1.1% adapted to many different functional groups, hence showing a generalistic pollination syndrome. One critical caveat: 90% of the reported observations come from the New World tropics! It is time to strengthen our efforts on understanding the pollination biology of Paleotropical Melastomataceae! – Find the full text under Publications!